Day 1 (Chas)
The day started badly from an anecdote point of view, with all 21 riders boringly turning up at the correct ferry terminal at the allotted time. Luckily Ed Yue’s Uber driver added a bit of excitement by driving into a wall straight after dropping him off, all in front of the assembled masses.
Two hours, two immigration checks and a bumboat ride later we were in the Malaysian town of Pengerang, ready to start the 180km ride to Mersing. Within another twenty minutes the group was off course and waiting for the first puncture of the day to be repaired; luckily this was only due to a brand new road smoothing our journey to the east coast, notwithstanding the odd piece of tyre-piercing grit. Amazingly it was the only puncture of the day.

The first rest stop was at Desaru, 50km up the road. Whilst we discussed the risk of our food being stolen by nearby monkeys, we attacked the piles of bananas and banana bread in the back of the support van like a… troop of monkeys.
Suitably replenished, we broke up into a Fast Group and a Faster Group. The latter idea might not have been sensible during the middle of the day on a road with no shade and the mercury pushing into the late 30s, but it did mean the kilometres absolutely flew past. Duncan Begg did much of the pulling on this sector, before revealing that he would be heading out to an offshore island rather than returning with us, hence had no need to conserve his energy for the following day.

Many of us were spent in mind and body by the time we reached the next stop. At least I think that was why we had the worst ever game of Guess the Film; Pat’s clue of “That Australian film with the blond actor” being possibly the worst ever description of a specific Russell Crowe film.
With a few of the back-markers beginning to wobble across the road, the pace slowed as the rolling hills became rolling; eventually rain arrived to cool us down and take our mind off the remaining kilometres, and to put us in the mood for some even cooler beers upon arrival in Mersing.

After eating most of the food in an excellent Chinese restaurant, and discussing the virtues of putting Vaseline above one’s eyes to divert sweat beads to either side (!), some turned in to rest for the next day’s exertions; others retired to the hotel bar for a little more carboloading. The hotel TV was of course playing “The Nice Guys”, that same Russell Crowe film.
– Chas 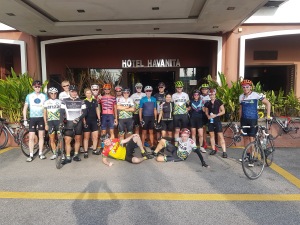 Day 2 (Ned and Becky)
As the sun rose over Mersing on Sunday morning, 22 of ANZA’s elite stepped out of their chambers on quivering legs. Fuel was required for the day ahead (although not for Duncan who had bravely decided to spend the rest of the weekend on a nearby tropical island…) and no one knew what form this first, most civilized meal of the day would take. Down in the dining room a groups of lycra-clad, stripey tanned pedal-pushers tucked into what can only be described as culinary triumph! Picture the scene from Beauty and the Beast where Belle was entertained and thoroughly nourished by Lumiere’s house staff and you will not be too far from the Havanita hotel’s hospitality… Mystery meat sausage, performance pancakes and giant, previously warm baked beans offered all the victuals necessary for our valiant travelers. Needless to say, the optional hard-boiled egg was taken by few as digestion needed no further challenges this day.

Bottles were filled, tyres pumped, “Rolling” was called and once again the train pulled out of the station. Our bodies moved in seemingly the only way we knew how; calm and serene from the waist up but spinning like crazy down below! With the sun on our backs we headed out, the undulating terrain reminding us of the miles journeyed the day before. The peloton naturally split into a cruisey group and a less than leisurely octet. Ed sadly missed the divide and put in an extra hard shift which he hadn’t planned for. Needless to say he endured well but was gladly welcomed back into the chase group at the next ice-cream stop…
Some notable events throughout the bulk of the ride were being introduce to Malaysia Police Force’s newly established Anti Cycling 2-a- breast Division and the compositions of Liesbeth’s, soon to be smash hit, “Mercy, Mercy Mersing” song. (Now available on iTunes).
More cycling happened before hitting Struggle Street. Our previously smooth road had transformed into the surface of the moon. This alone didn’t deter the ANZAnians however the increased traffic and volume of log-bearing heavy ass vehicles was enough to reduce our twos-up soiree into a single file cong(a)lomerate.
This continued until Johor Bahru where we were greeted by one final manmade mountain. This flyover was like nothing we have in Singapore. If conquered, it’s sheer length and elevation alone would be enough to achieve a steady stream Strava Kudos well into your twilight years. This final obstacle was met with reluctant enthusiasm from most and a traffic-defying gel stop at its summit by Martyn!
I am very pleased to report that all who started, finished (except Duncan ;-p), we all had a super-awesome time and I would like to thank all who helped to organise for their efforts. We are sure we speak for all when we say that this trip has been an absolute highlight of our time in Singapore so far and we are looking forward to many more!
– Ned & Becky
Photos below 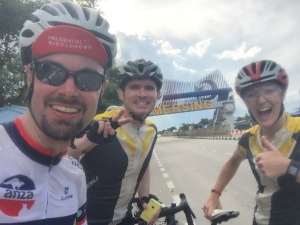