I found out in January that I would have a 4 day work trip to Pau, France (located just north of the Pyrenees’). I managed to stretch the work trip out to a 3 weeks (the cycling is really good around there) and then realized it also timed perfectly with my 2 favourite bike races, the Tour of Flanders (Ronde van Vlanderen) and the Paris-Roubaix. I took an additional week’s leave and signed up to the sportives, without really thinking about it or knowing what to expect (sometimes I make impulsive decisions). After 2 weeks of “training”/riding around the mountains and hills of Pau and one week of conferencenetworking/heavy drinking, I was ready. 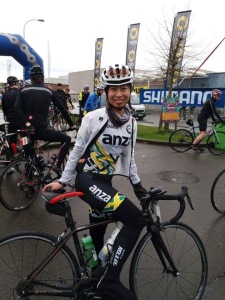 The Tour of Flanders Sportif

I travelled to Ghent the day before the cyclo-sportif. I met up with Adam, a cyclist from my SPR, my previous Perth cycle club (who I’d never met before) and we talked strategies over dinner. He planned to do the 200km ride, whereas I had signed up for the 140km mid-distance Flanders cyclo-sportif. We both planned to ride to the start in Oodernarde, a town about 25km south of Ghent. The next morning I set off by myself with ominous grey skies looming overhead (Belgium = rain). I got 2km down the road where I passed a group of cyclists loading bikes into a van and decided to stop and ask if they had space for one more. They didn’t really, but were happy to squeeze me in, letting me hitch a ride and save me a ride in the rain. Winning.

After helping them park, I set off on the biggest cyclo-sportif I had ever done. The Tour of Flanders Sportif had sold out with15,599 riders and it was brilliant. The weather cleared, there was always a wheel to follow and people were relaxed and enjoying the ride. I saw mostly road bikes, a few mountain bikes, some electric bikes and heard rumours of a penny farthing. The other grand fondos I’d ridden had all been races so toodling along at my own pace in the glorious Belgian sunshine was a revelation. I was wearing my ANZA kit and it was a conversation starter. I got lots of “hello, you’re from Singapore?” and then “wait, you sound very Australian…” and it was great. About 10 km in, after a bit of the same chat with some Australians, I got a “Solo Australian female? You can ride with our tour group if you like! It’s led by Stuart O’Grady…” and that’s how I came to ride the Tour of Flanders with a past Paris-Roubaix winner. Double winning.

The day was great. Stuart was great to talk to, the quintessential Australian, everyman’s bloke, loves beer and had all sorts of cycling tidbits about riders and the course (he also did back-wheel skiddies while descending at 50kph). The cobbled climbs were challenging, the descents fun and rolley, and I was well paced with the middle-aged men in the group (and Stu, who realistically hadn’t ridden a bike in 4 months). The Belgians also know how to put on a sportif with each feed stop having pumping DJs and a variety of food and mechanical services. 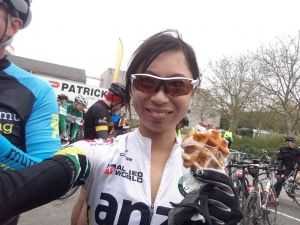 The next day I went to watch the race. At Flanders, both the men and women race on the same day and in the morning before the women’s race, I met Jessica Allan, an Orica-Scott rider from my home town, Perth. The start of the women’s race was a real buzz and it was wonderful to see so many people out supporting women’s racing. After the start, Adam and I rushed off to the Kweremont, a 3km climb which the women rode up once and the men 3 times. 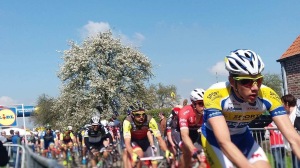 The Kweremont was a great place to spectate from, and again, the Belgian’s know how to organise a bike party/cycling race; and there were DJ’s, big screens, food stalls and plenty of beer. We had jumped the first barriers and were located right on the cobbles, along with spectators from all around the world. Watching the pros power up cobbles repeatedly was humbling. The day before I had slowly ground my way up the Kweremontin my easiest gear but the pros? Big ring, pain face and repeat climbs – great watching. 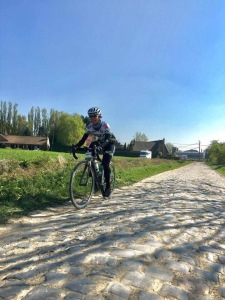 After a week filled with Belgian chocolate and beer, I travelled south to Roubaix for the Paris-Roubaix. I initially wasn’t planning to ride the sportif, but a friend persuaded me that I’d be fine, and I believed in his unfounded confidence in my abilities and signed up. After all, it was a “once in a lifetime” opportunityto ride the same final 172 km that the pros ride, complete with 52km of cobbles (I obviously didn’t think it through). And because misery loves company, I persuaded my friend Colby to join me (his wife thought we were crazy – she was right). Doubt started to creep in as we picked up our race packs. There were fewer women at this event than I’d ever seen at a cycling event, maybe 1%? Women are generally sensible, perhaps I am not being sensible…

The day started out foggy and 5 degrees and after 10km we hit the first cobbles, the 3 star, 2.2km Troisville à Inchy. This was nothing like the smooth, reliable cobbles of Flanders. The Northern French farmers had obviously placed each cobble specifically to inflict the maximum amount of pain and I bounced around like a cork in a thunderstorm. Don’t hold the bars too tight, but don’t let go, keep pedalling, pick your line… I felt like I was small enough to float over the Flanders cobbles but Roubaix cobbles were brutal. The second set of cobbles was worse, the Viesly à Quiévy included a cobbled descent and it was bloody terrifying. Don’t brake!! Keep your line! I tried to hold my line on the crown so I didn’t die in the surrounding cobbled potholes on either sides. Turns out, when you stop pedalling from terror, you slow down, and when you slow down the cobble-induced pain is enough to jolt you back into pedalling again (in my defence, the following day the pros crashed badly on the same cobbled section so I don’t feel like I’m exaggerating). Anyway, I made it through; 2 sections down, only 28 to go – it was going to be a looong day. 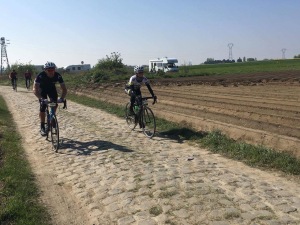 I soon learned to seek out every gutter available. I rode on everything, dirt, gravel, sand, grass shoulders, anything for a little relief from the horrendous cobbles. Why was I even doing this? What kind of sadist was I? Anyway, my CX skills definitely came in handy. At around 70km I reached the 10thcobbled section, the famed Trouvee d’Arenberg. No gutters, no relief, you’re supposed to just power through cobbles like a serious cyclist but really, maintaining power over 2.4km of 5 star cobbles is a joke (and a very bad one). Section done, only another 100km to go! At each feed stop we regrouped, complained about the cobbles, and laughed/cursed at how stupid we were to have signed up for this sportif – it was that kind of day.

By the 19th segment of cobbles I was kind of getting the hang of it. 10 segments to go, I was inspired – 50km left? That’s practically almost finished! The last 50km was a bit of a blur, more enjoyable than the first 120km but by far the best part of the entire day was entering the velodrome for a lap at the finish! Hurrah! Finished!

I’m pretty sure I only finished the event due to sheer tenacity. That and my friend Colby who let me follow his wheel over the whole 172km (he’s a good bloke). All those photos of me smiling? That’s me laughing at my own Most of me never, ever wants to do that ever again. a very tiny part of me wants to come back and better it “now that I know how” (those last 10 sections were much better than the first 19!) but luckily I live very far away and that probably won’t happen. 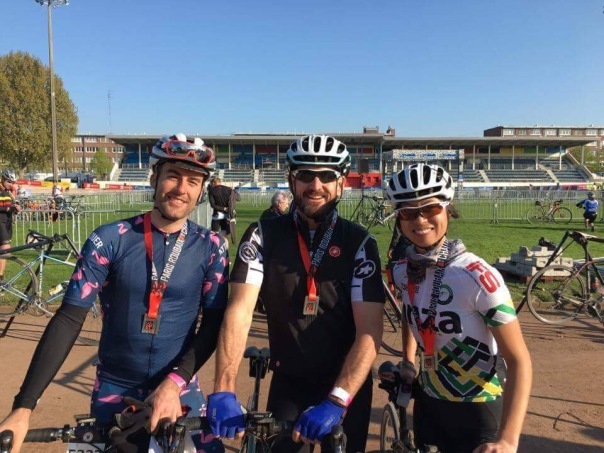 The next day, I watched the pros ride the Paris-Roubaix and drank beers at Arenberg, which was much, much better. And now, when I watch the 2016 Matty Hayman video where he says the Paris-Roubaix is his favourite race I think he has problems.

Positives: I can now can hit every road bump and grate in Singapore and scoff “you call that a bump?”

Negatives: All the cobbles. ALL OF THEM. It really is called the hell of the North for a reason (correctly advertised). 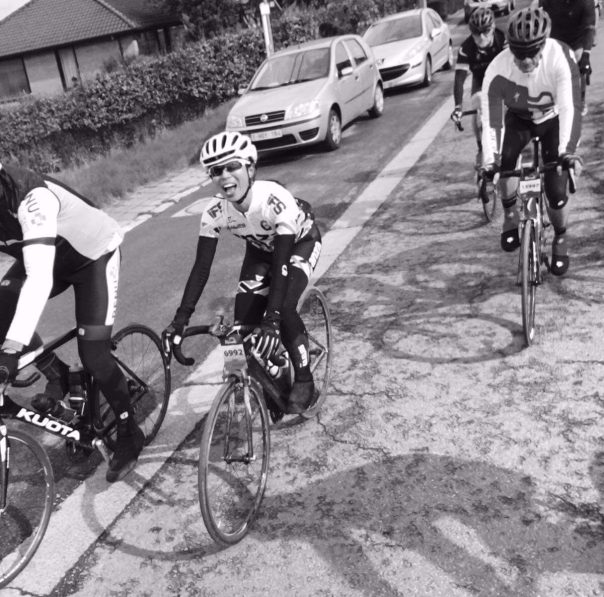