I’m at a graveyard and I’m totally underdressed. These are the first thoughts that cross my mind when I join the Caithness Cycling club for their weekly 10 mile TT. The locals have described this as a decent night but at 12 degrees and a biting wind I have a different opinion. It’s cold as Fk and windier than a week on an all bean diet.

Im at the Graveyard for the weekly Caithness Cycle Club event with 20 others. I used to come here drinking when I was 16 so it’s a place with fond memories. It also allows me to crack an awkward ” will totally bury myself” line later after the ride…

Caithness is where I grew up. It’s the most northerly part of the UK mainland and John O’Groats is just a few miles up the road. The Thurso TT is the most northerly race in the UK. Despite the entire county having less than 30,000 people, the local clubs still manage 2 TTs per week which is more than Singapore manage in a year! Apart from the cold and wind, the riding is pretty awesome with only 5 traffic lights within 100km!

The local boys are strong too with a couple from the region representing in the last Commonwealth games.

Thanks go out to Robert Cormack of the Wick Wheelers for lending me a bike for the week. I’m on a borrowed Cannondale Steel Cyclocross bike with 33mm knobby tyres so I’m not going to win anything but have been looking forward to riding these TTs for a long time. i neglected to tell the wife that I’d actually timed the holiday flights to enable squeezing in both TTs during the holiday 🙂

I’ve been here for 5 days and managed 350km of riding. Apart from the unbelievable cold, the riding has been awesome. You can easily go 5 hours without a traffic light and cars are at a minimum. The rough roads, hilly terrain and freezing cold winds make it hard going but the views are superb.

The TT starts at 7.30pm – it actually stays light till 11.30pm at this time of year. My mum escews conventional racing wisdom by giving me a massive dinner with sticky pudding about 90 minutes before the start and I’m feeling on the verge of barfing when I make it to sign in

The local boys are in decent shape and the number of TT bikes, aero helmets and overshoes make it clear that they take it seriously. They’re decent lads and give me some advice whilst helping pin the number. I’m dying from the cold and have redefined my aero priorities. I’m wearing a woolly hat and arm warmers rather than the usual skinsuit. 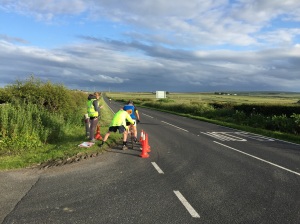 TT itself is a standard out & back with a dead turn round the Marshall at 5 miles. It’s uphill most of the way out but the wind tonight is in the face on the return. As a guest, I’m one of the last out and following the faster local lads.

As always, I overdo the way out – thinking that the downhill on the way home would be easier. My 1 minute man doesn’t gain much much on the outer leg and despite riding on a tank, am getting confident of closing the gap on the return leg. Wishful thinking as I inevitably blow up in the return headwind. I finish the night in 26.20- good enough for 3rd and a shock for some when they see what I was riding.

A great night overall and superb to see a thriving scene in such hard conditions. If you’re ever up North then do bring your bike along – the riding is excellent!

I repeated the feat a couple of nights later when I joined rival club Wick Wheelers for their weekly 10. Their course was slightly flatter but the 40km+ wind on the way back made it the slowest TT of my life. Average speed was 42km out and <30km on the way back. Mental night where I came in 4th.

Thanks to the Caithness Cycling Club and Wick Wheelers for the hospitality and good racing. 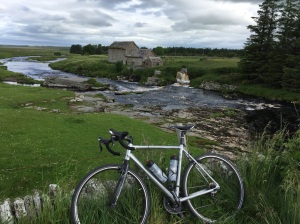