Sunday saw the first race of the year from Cycosports and after the success shown from the Cat two guys at Bintan I was hopeful we would be able to take it to the Mavs and give them a run for their money. Anza was represented by a small but strong foursome of Nathaniel, Hish, Macca and myself.

We had little chit chat 10 mins before flag off to come up with a “plan” and knew from the rider list the Mavs would be controlling most of the race with 7 strong riders. I had given a few heads up on guys to watch for but other than that the plan was to go out and have some fun and see if we could cause or get in to a break.

Should I stay or should I go…..

The race started pretty easy the first lap and there were no real breaks or surges that I can recall. During the climb on the second lap there was a little surge and a few went off the front so I decided to get up near the pointy end in case anything interesting was forming. I made it across but nobody was keen to go and this was the theme of the race for me. Around 4 laps to go there was another break formed with 2 Mavs, 2 integrated Riders along with Hish and myself and we had a bit of distance on the pack. I thought “game on” we have a good representation from 3 teams and could get a gap on the Joyriders et all however it was very faint hearted and we were soon swallowed by the peloton again. Looking back this was good tactics from the winners as we were working our socks off closing gaps and trying to get away burning valuable energy. 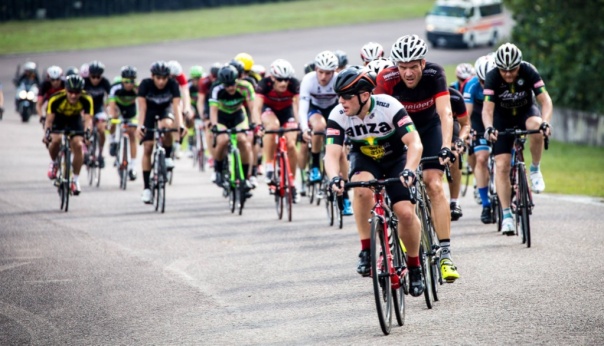 Watching and waiting as Hish dishes out some hurt

As we started the last lap I knew I didn’t have a lot left to give and I already had a marker on my wheel of the Mavs sprinter Matt Lodge. At this point all logic went out the window and I decided to attack him with everything I had on the last hill in an attempt to get rid of him and hope a climber or two would be able to follow me and carry me to the line with a small gap over the peloton. In my mind this was going to go down in history as one on the greatest attacks ever. I would be signed for Team Sky within the hour and given a fancy Dogma with suspension prior to starting in Paris-Roubaix the following weekend. As I said all logic had went out the window….

With the tank emptied and the rain starting as we made our way down to the chicane for the final time I looked back to see the damage or lack of…. Matt was still tight on my wheel and the peloton were swarming. I saw the winner David go on the outside and I tried for one last turn of pace however even a damp squib would have had more of a bang. I threw the towel in around 400m from the line and rolled in 5 seconds down in the pouring rain. Dreams of rubbing shoulders with Geraint Thomas on my new Dogma shattered.

The result was a little off what I had hoped however from where I was the racing was great fun and the organisation as normal from Cycosports was spot on. Thanks to the whole organisation team that made the race happen and also thanks to Tony Rose for the photos which I have stolen from the facebook page.