Stage 2 ramps up the pain figuratively and literally today. The overseas Singaporeans agreed that today’s climb looked like a “3 Faber” and was therefore a bit nasty. The stage was an advertised 102km with the climb hitting us at around 70km. The descent was described as “dangerous” and not to be raced- it would prove decisive later on. 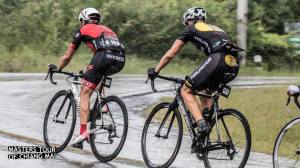 we started on a busy highway about 30km out of town. Wisut gave orders to the Singha boys to keep the speed down so that we were safe in the traffic. This lasted less than 100m as they attacked from the gun. There was carnage in the peleton as we hit 55km within the first km of the race. By the time the 1st little climb arrived at 20km out, we had an average of 46km/hr. This was achieved whilst navigating trucks and heavy traffic. Dodgy but exhilarating.

the race split further on that 1st climb and I ended up in a 2nd group. After a 10km hard chase burning matches, we regained contact with the front group of 25. 6 from Open had just gone off the front and as all teams were represented (with Rowdie representing TDA) there was no chase from the remaining Open riders. 30s and Open B also seemed content to sit in and the pace fell to an easy 33.

Up front, we had Pouly, takai, Vincent Ang from Singha, Rowdie TDA, Ben Arnott Mavs and the CCN yellow jersey. They built a 3:30 gap over the dawdling peleton until the foot of the climb at 70km. Around this point, the heavens opened and it was full on monsoon downpour making the roads treacherous. Pouly and CCN attacked at the foot of the climb at a speed described as”like a downhill sprint” and were never seen again. 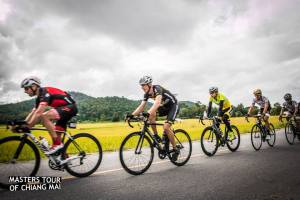 the remaining 4 worked up the climb together but things fell apart on the ultra slick and dangerous descent with Singha taking off the front. Rowdie made it down in 5th but took a couple of wrong turns on the run in to the finish and ended up in a small group with Ben and a bridging up Singha/CCN. He took another 7th on the stage.

further back, the descent caused problems in the rain and my legendary crap descending skills caused me a few AG2R brown shorts moments and the loss of maybe 10 miinutes on the group. I’m almost certainly now the Lanterne Rouge of Open! Others were not so luck with Steven Wong taking a tumble (swollen shoulder but ok) and 5-6 others who went off road. 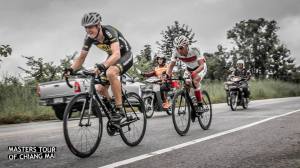 food and ceremony were again done with startling efficiency and the peleton soft pedaled home for our 2nd day of ~150km round trips. With such a minging day, there was only 1 plausible option for cleaning the bike…

Tomorrow is the queen stage with mountains a-go-go.