The second MTB race in two weeks and this one took riders to Tampines for a
real gem of an XC short course circuit on Saturday and a downhill
competition on the Sunday.

Late changes to the XC schedule saw the elite category removed and the
start times pushed out to mid afternoon making for very competitive racing
in very hot conditions.

Those same changes also saw the introduction of a fat tyre category, it’s
been incredible to see just how quickly these bikes are growing in
popularity, equally impressive was the pace the eventual winner was racing
at.

The course itself was just over 3km and each category only 3 laps so the
pace was frantic from the get go. Myself and Mike Daish were representing
ANZA in the master B category amongst a strong field with Morten Hansen,
Cannasia and a bunch of local riders that I don’t know but all of which
happily put their foot down from the start. 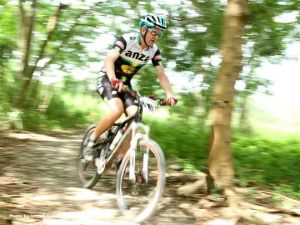 Frankly I just wasn’t in it from the start and after the first climb was
already losing time to the front runner’s. Mike however powered off in the
lead group, overtaking one of the cannasia riders and making another
cannasia rider and eventual winner work damn hard for the overall victory.

In the end Mike fought it out and secured 2nd place.  I thought the marshal
on the finish line was mad when he told me I had finished on the podium
given I knew I’d finished 5th but to my surprise the organisers were indeed
awarding medals to the top 5 finishers.   So some more medals for the pool
room and for Mike amongst other things a case of Monster Energy drink, so
if you hear him making his legendary loud calls (OVERRR, CLEAAARRR) even
louder on the rides during the weeks ahead you know why.