Nice to hear a race report from some of the younger ANZA members.  For 12 years old, it has to be said, she writes better than many of our more mature members 😉

Thanks to Ellica McGregor for putting pen to paper, or finger to iPad [your technically challenged editor had to work out what a .pages file was and how to get into RTI].

My Mum, brother, sister and I all left home at 9:30 in the morning to fit all our bikes and us into a mini van which would drive us to the MetaSprint Triathlon at Changi where I was entered in the youth category which consisted of a 250m swim, 10km bike and a 2.5km run.  Whereas my sister entered in the kids category which included 150m swim, 5km bike and a 1.5km run.  It took us about twenty solid minutes to squeeze in all of the bikes so we had room to move and inch whilst we were driving to the race.  We finally got there at around 10:30, which left me twenty minutes to prepare for my race. I began to panic and ran my way down to transition.  Transition was pretty much full, but I spotted a small opening big enough for my bike.  I walked over a big root of a tree, wondering how I would do all of this during transition, and parked my bike under a palm tree.  After I set down all of my things, I walked over to the body marking stall with my swimming cap and goggles in hand.  It was only after the race I became aware that on my arm was my sisters race number and as was my wristband, on my helmet and race belt was my own.  I must admit, this was quite embarrassing realizing I had somebody else’s number written in giant numbers all over my arm throughout the whole day. 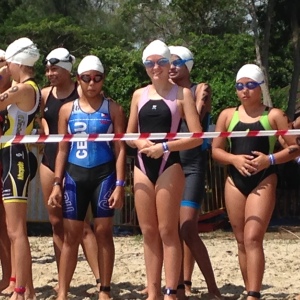 After body marking, I headed my way over to the start. The other girls seemed much older than me and almost twice my height. Some of them were talking to each other, whereas I was standing there trying to clean my goggles. I’m not as well trained or prepared as the others are, I use my Mum’s racing bike and only a swimming costume, but it works. They opened the gates and we ran to the start line. As I was running I tripped, I hurt my heel and I must have looked like a complete fool. We stood at the start line, waiting for the horn to blow. They counted down, the horn blew and we sprinted into the water. For a couple of seconds I seemed to be in the lead. Before I could process the thought of actually being in first, everyone started swimming over me.  After the storm of girls swimming over me was over, I looked up to see the damage.  There were about ten girls in front of me, way in front.  I turned back to see where I was, it wasn’t too bad, I was expecting less people behind me. I carried on swimming, girls swimming over me every now and then. I ran out of the swim, exhausted, wanting a sit down.  For once, I was actually looking forward to the bike.

I jumped over the tree root and sat down to put my shoes on.  The small pool of water on the way from the swim didn’t have much of an impact since my feet were still covered in sand. I tried getting the sand off with the towel, it didn’t work.  I ran out with my bike and began on the cycle leg, which was along the Changi straight.  My Mum doesn’t have a computer on her bike, so I had no idea how far or fast I was going.  I began to see a U-turn in the distance, and I got excited. Getting nearer, I saw that no one was turning around by that U-turn, I soon realized it was the kids turn and there were people standing there so no one could have gone around there.  It felt like miles before I got to the U-Turn, but I reached it and turned.  After ages, I saw people in the distance.  There were a few cones in the middle of the road.  There was a slightly smaller boy in front of me as I was about to turn, so I couldn’t go any quicker than I was.  I was cycling behind him when I heard an ambulance siren behind me, the people began shouting at me and the boy, telling us to move.  I panicked a bit, but the boy moved, as did I.  I was glad that he knew what to do then.

I started running my 2.5km down the park. It was boiling hot and there wasn’t much shade. As I was running, I saw a few girls from my category pass me on the other side, meaning they were soon done with there triathlon, which wasn’t a great sight for me.  Once I got to the U-Turn, a man from the adults category came out from behind me. He was running with attached speakers, it would have been great if he was playing a song I liked, I would have ran after him.  This man wasn’t playing a song I liked, in fact, he was playing one of my least favourites, which was “Gangnam Style”.  He ran past everyone, singing along.  I doubt the speakers could have gotten any louder, I heard the whole song, including him singing as if he was PSY in the distance.  I finally got closer to the finish.  I ran past the man hosting the event, hoping he would say my name.  He tried.  As he said it, it sounded more like “Elishia McGregor” rather than “Ellica McGregor”.  I got quite annoyed, but it happens often with substitute teachers in my school, so I am used to it.  I couldn’t wait for a bottle of water at the end.  They put on my medal and instead of nice, cold water, they were handing out MetaSprint plastic bottles with nothing inside them.  I went and got myself water from the drinks stand and walked over to my Mum and brother.  After my sister crossed the line, we all went and got our bikes.  I was still exhausted, although, in order to get home we had to ride 16km.

[Good work Ellica, I hope you enjoyed the day! Ed.]