Somewhere in a distant Galaxy far, far away……

Ok, that’s overstating it a little, somewhere in the F1 Pit Building between the Friday Crit’s and the Sunday Challenges the next generation of cyclists get to have a go.

Non competitive they say.  Try telling the kids that!

In the kids race, John Bateman’s son Lucas and Kev McGregor’s son Lukas (hmmm, sort your spelling out guys) certainly wouldn’t have been told it wasn’t a race. 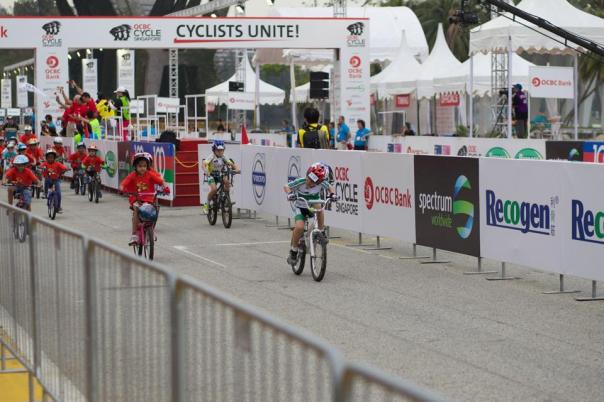 And with apologies for the blatant Cherriman bias in the photos (well I can only publish what you all send me!) In the Junior’s race (which my son Luka entered even though he was too young, as he wouldn’t get out of bed for 5k!)  The ‘winner’ was wearing a time trial one piece suit and a pointy helmet!  Never have I seen an 11-12 year old set of for a 30 minute race at such a pace.  Anyway, the mystery man lapped nearly the whole field except for a couple including Kev’s daughter Ellica who was most aggrieved that she had to do one more lap than her sister Elina.  I think Luka came in about 5th boy which he was delighted with.

The Juniors Ready to Go!

Then after the event we ran into the legendary Robbie McEwan who was trying his arm at another 2 wheeled method of transport.  Luka completely unphased (while his dad stutters isn’t that Robbie McEwan) says “Can I have a go?”

Well done to any and all ANZA kids who took part and anybody who want me to edit this to add in their children, just send me the details and I will “Make it so!”

1 thought on “Bike Trek – The Next Generation”