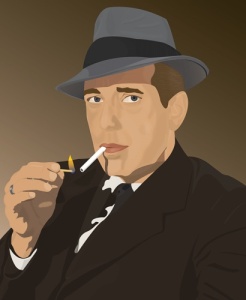 I woke up, my head was pounding like 12 rounds with Jack Dempsey, my mouth felt like somebody had poured sawdust into it, and the wreckage of the night before was lying all around me.  Light was streaming in through the blackout curtains and it was making my head hurt even more.  It was then I noticed her, the broad in the corner, drawing deeply on her cigarette. “God damnit I thought thats 300 Ringitt The Sweeper is going to charge me to clean out the room”  “Who are you anyway?” I thought “where did you come from?” and “Why don’t I remember meeting you last night?”  As I opened my eyes further I realised the broad was in fact my bicycle with a T-Shirt hanging on it, and it was with a greater horror that I realised that I wasn’t a 1920’s detective and that I was going to have to get up and go cycling.

I cast my mind back to what had caused this disaster to unfold.

A few weeks ago, Mark “The Sweeper” Losi had commented that it had been a year since any of his so called mates had come to visit and so with a flick of my wand I rustled up 6 random strangers, called them his mates and arranged for them to be in KL for a weekend of cycling.  Four of us Alan “One For The Road” Benson, Derek “Road Hugger” Donaldson and Mike “20k” Sewell flew up to KL to be greeted by our gracious host and proceeded to his hotel where we were in the bar by 8pm making sure we were well prepared for the next day of climbing.

The evening proceeded rapidly in the wrong direction when at 9.30 we received news that the carload of John “Stir Fry” Henley, Dave “Road Report” Powell and Raoul “Baby Face” Berthillon were still on the Singapore side of the Tuas crossing.  Quick calculations were done and we realised that we would be doing preparation until about 1am at this rate.  “Barman, another round please!”  I think I left out dinner, but that’s because I have no recolection of that ever happening.

By 2am a few of us had to retire leaving only One For The Road and The Sweeper to greet the late comers.

The next morning, hungover, or tired or both, we gathered at 9am in the lobby 2 hours after the intended start time.  Well, it’s not like it gets hot in KL or anything! 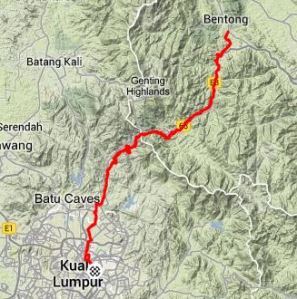 The plan was simple.  Through KL, over Genting Sempah, on to Bentong to rehydrate turn around and come back with a short detour for lunch.

We proceeded out of KL with The Sweeper abandoning his traditional position to take the helm while we navigated out of the city, crossing the Pavé and feeling all Paris-Roubaix which was appropriate considering One For The Road was wearing a Café Roubaix T-Shirt the night before.  Into the hills where the group fell apart of course.  A beautiful 15km-17km climb through the tree lined roads and it gradually got a few degrees cooler.  The descent was epic, nobody behaved like a school boy pepped up on Mars bars showing off in front of the girls on their first downhill ride and the few gravel covered corners were navigated with no physical but a 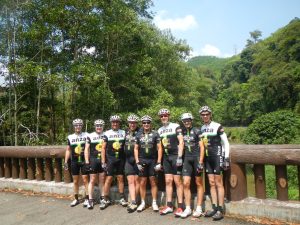 little mental trauma.  About 20km into the descent a few started to get concerned. “Aren’t we going to have to ride back up this?” and “We seem to have been going downhill for a long time now!” were heard a few times “HTFU” was the obvious response.

10km more downhill and at Bentong a quick decision was made that we weren’t interested in seeing a waterfall and we refilled the water bottles.

Only 3 bottles of regular 100 Plus what is the world coming to.  That said, that one petrol station, unlike any in Singapore, clearly knew its market as they had a stock of powerbar gels for sale.

It was at this point that The Sweeper made the fatal mistake of commenting to One For The Road that his headset was a bit loose.  Faster than anybody could say “Do you think its a good idea to dismantle a headset 60km from the nearest bike shop?” he had it apart.  No worries, 20 minutes later it was reassembled with the confident words “You’ll be grand, just use your back brake a bit more coming down the other side of this hill!”  and with those words ringing in our ears, we started the ascent, and by now, it was HOT.  40C+ was being called form various Garmins. 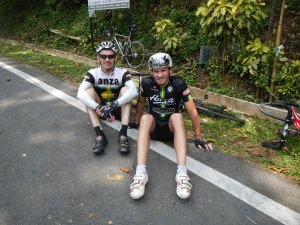 The first 20km of the climb seemed to fly by as we tucked in behind Baby Face’s wheel, and then the real fun began.  As the hill kicked up the group scattered with The Sweeper taking up his traditional role of making sure nobody fell of the back of the group and Baby Face using his age and weight advantage to punish us all.  By now last nights preparation was well and truly out of the system.  None the less, it was a lovely climb if a bit warm with the sun beating down on our backs.  We regrouped at the agreed turn off point for lunch, where Road Hugger demonstrated the reason for his somewhat strange name, and agreed to abandon 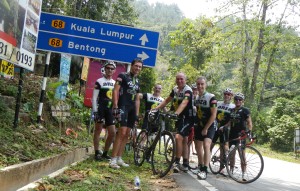 lunch in favour of an earlier recovery session at the bar and headed on up for the worst of the climb, and it is during this last climb that I regret to inform Road Hugger’s family that we nearly killed him.  Well that’s what he made it sound like anyway (big jessie!).

Another epic descent ensued as we headed back to KL. 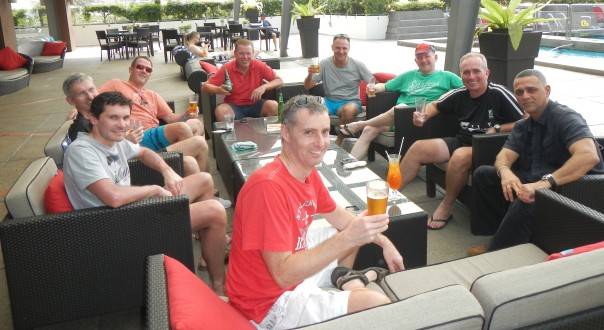 recovery and Flams.  Back to the hotel for more recovery and an early night ready for tomorrows outing.  In fact, with 3 sessions of recovery in one evening, tomorrow should be  a blinder!

Sunday morning came Deja Vu.  I woke up, my head was pounding like 12 rounds with Jack Dempsey, my mouth felt like….  Actually we all felt a lot better after a few more hours sleep.  On arrival at the lobby I found Baby Face’s bike in pieces.  Somehow he had managed to get a puncture in the lift.

The plan – out of KL towards Genting.  Do The Wall, do Evian, turn around and come home, do recovery again and go to the 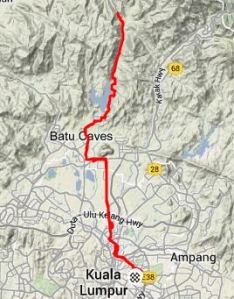 airport.  A nice gentle 60km recovery ride, although I think we all felt like we had done enough preparation and recovery in the last 2 days.

The Wall and Evian are a bit steeper at 10%-12% than Genting Sempah but again, lovely scenic rides, spoilt only by the organ donors (as my traffic policeman friend used to call them) speeding past at 140kph on their way to time-trial Genting.  We went up and over, regrouped, then proceeded up Evian.  Why so called I hear you ask, and the answer is that a few pipes have been hammered into the side of the mountain and from those pipes flows our beautiful refreshing Genting Spring 😉  Due to the lack of rain and the water restrictions in and around KL, 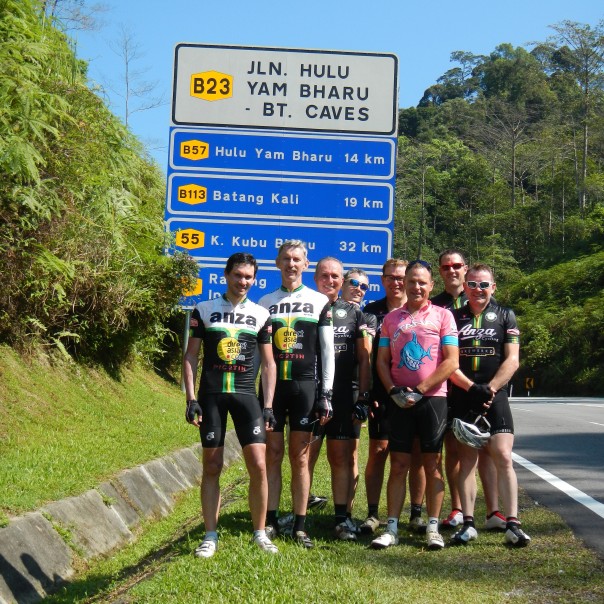 there were a number of cars lined up filling jerry cans to take home to beat the crises, a good exchange of petrol for water.  After a brief discussion of whether to tackle Genting we all agreed that we would rather go and recover round the pool with some great food and a few drops of the Amber Nectar, and with that some more outstanding downhill ensued as we tried to maximise our pool time.

Lessons from the trip: