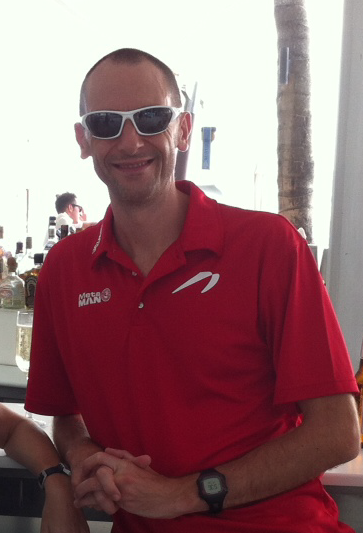 Who are you?
Martin Reynolds. Married to Liz.  2 children, Emma aged 11 and Jake aged 8

Where are you from and how long have you been in Singapore?
Manchester, England.  9 years in Singapore

How long you been riding?
8 years

Greatest cycling achievement?
Climbing Mont Ventoux. Though returning in one piece following a 330km Audax ride into Malaysia taking 17hours (!) is also up there

Worst crash?
In my condo car park after 5 hours in the saddle.  Slipped at the grand speed of 5kph and landed on hip.  Hospital and crutches followed.

Most embarrassing moment in life?
Too many to mention.  Though getting locked out of my hotel room in Germany wearing only swimmers was a bit of a ‘Mr Bean’ moment

Most embarrassing moment on a bike?
Getting lost on a Kranji

If your life was a film, what would it be?
Not a clue.

Motto in life?
Do your best

Motto on the bike?
If you’re not first, then you’re last

Words of wisdom for the club members?
None – I am still learning myself!

If your life were a film, who would you want to play you?
I would say Daniel Craig – though I think my kids would say Rowan Atkinson

Favourite SG ride and why?
You can’t beat the Eddies to wake you up on a Wednesday morning.  Also, PulauUbin is a great place to go with the kids.  Quiet roads and a chilled out ride

Where can you be found when not on the bike?

Swimming in the pool or running the Green Corridor

Best ride in the region that you have done?

Cycling ambition still to be tackled?

The bike course at Kona

3 words which best describe you?