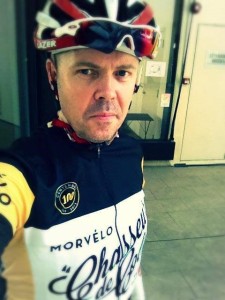 Sean Hogan, father of 2 and an occasional user of social media

Where are you from and how long have you been in Singapore?

I hail from Sarf Larndon and have been living in Singapore almost 4 years. In all that time I haven’t been back once

How long you been riding?

The Ipoh Century Ride in 2012, other than that I have unfinished business on the Nove Colli back in Italy

That’s easy lah. I decided to get close and personal with a bus stop at 6am on Dec 27th 2012, and narrowly lost. It was a lucky escape, just the broken collarbone that’s all.

Most embarrassing moment in life?

Not sure embarrassing as more frustrating. Missing the birth of my son when the staff didn’t realise I was in the reception area waiting to be called in to witness the event. I’d been present at my daughter’s birth, so this stung a little.

Most embarrassing moment on a bike?

Going the wrong way at the Cycopsorts Desaru last year or dropping my chain at the Nongsa Challenge this month?  Hmmm. It’s a close call.

If your life was a film, what would it be?

Crikey! That’s a tough one Ed.   It’s got to be The Lego Movie, because I have been told by my wee boy that I’m the Special 😉

The next race surely can’t be worse than the last….. Can it?

Motto on the bike?

Words of wisdom for the club members?

Never end a ride at a Starbucks, never ever!

What’s the last song you’d play before a race to motivate yourself?

If your life were a film, who would you want to play you?

Given the way I’ve been riding recently probably one of the Laurel and Hardy films.

Favourite SG ride and why?

Ah there are sooo many to choose from aren’t there. Basically any ride with good banter, where I don’t get dropped and it ends with a great coffee.  What more can you ask for, eh? Okay, the Infinity Loop… Frankie’s gift to Anza.

Where can you be found when not on the bike?

Best ride in the region that you have done?

Cycling ambition still to be tackled?

I’ve ridden the shorter Nove Colli twice, but want to return to do the full route all 9 hills a route that makes Bintan look flat. After that, but most likely to come sooner 😉  I want to have a crack at the Taiwan KOM hopefully this year.

3 words which best describe you?

Gregarious, Caffeinated, and less than fast

Sean, you’re famous for having really bad luck in races due to physical or mechanical failure. Why do you think you’re so unlucky?

Celebrity is overrated Ed.  I’m aiming low in this life so I’d nail it when reincarnated in the next.  The mechanical failures have been easy to explain, the physical ones are more on the psychological level. I just need to train (harder) and not give in so easily.

You also seem to be a member of every bike club in town. How many have you joined?

Remember the Tour maybe the biggest, but the Giro will always be the best 😉